Having first been invented near the turn of the 20th century, the heat pipe is not in itself a new invention. Early heat pipes were constructed out of hollow metal tubes that were sealed at both ends, vacuumed, and charged with a small quantity of evaporative fluid.  They contained a "wick" to transport the fluid from one end of the heat pipe to the other.

Relying on the energy absorbed and released from the phase change of the fluid, the hollow heat pipe allowed an extremely fast heat transfer.  Heat applied to one end of the pipe would almost instantaneously evaporate the fluid inside.  This vapor would then move to the other, colder end of the pipe where it quickly condensed back into a liquid, releasing the heat absorbed during the evaporation.

Modern heat pipes are able to transfer heat several hundred times faster than a solid copper rod.  However, the applications for heat pipes have been limited in the past due to their construction expense.  The requirement for separate pipes and interior capillary wicks has traditionally kept the cost of heat pipes too high for all but the most exotic applications.  Additionally, wick materials did not last very long.

Heat Pipe Technology, Inc., revolutionized the construction of heat pipes in the early 1980's and HPT was granted the first of several heat pipe patents in 1986.  The methods that were developed brought the cost of the company's patented heat pipes down to a commercially affordable level.  The patent also disclosed a new and previously undiscovered use for heat pipes, namely, using them to increase the efficiency and dehumidification capability of air conditioning systems.

The Discovery of Heat Pipe Dehumidification

In 1983, HPT research engineers conceived a method for applying heat pipes to an air conditioning system.  A prototype was built, which included a heat pipe arrangement that would later become the company's patented dehumidification heat pipe technology.  The initial testing indicated that the heat pipe dramatically improved the performance of the cooling coil for dehumidification.

This research led to a Technology Utilization contract with NASA.  The potential of the technology was also recognized by the Department of Energy's (DOE) award in 1991 through a grant for bringing the heat pipe technology to public awareness.

While consuming no energy, except for the small static pressure increase, the heat pipe precooling effect allows the cooling coil to operate at a lower temperature, considerably increasing the moisture removal capabilities of the system.  With lower humidity, the indoor air becomes more comfortable at higher thermostat settings, resulting in net energy savings.

Heat pipes are also used to recover energy as heat exchanger between supply and exhaust air streams.  With no moving parts and no tilt mechanism needed, HPT energy recovery modules have a distinct advantage over the competitors and other technologies.

The Markets for Heat Pipe Technology

HPT's advances in heat pipes have opened many large markets with a wide variety of applications.  The commercial and industrial applications include, but are not limited to, medical and health facilities, data centers, schools, supermarkets, restaurants, libraries and archives, warehouses, hotels, public and commercial buildings, and high-tech facilities.

By 1990, the company had discovered the huge market that exists for commercial HVAC dehumidification systems.  The company began performing market research and working closely with a number of utility companies, specifying engineers, and national restaurant chains to install, test and monitor the heat pipes.  The results were very favorable and the technology became the centerfold of numerous presentations at workshops and seminars.

Since then, the growth of heat pipe acceptance has become apparent with numerous installations.

There are many applications for the company's patented technology.  Commercial markets are extremely receptive to the dehumidification products and heat recovery products.  Below is a listing of some the commercial applications for HPT Dehumidifier and Heat Recovery Heat Pipes.

Heat pipes are the most effective passive method of transferring heat available today. In their simplest form, a heat pipe is a sealed tube containing a phase-change fluid.  The heat pipes for HVAC applications are usually made of copper tubes, aluminum fins..  Different working fluids are used to suit various temperature ranges.  In the case of heat pipes for HVAC applications, commercially available refrigerants are normally used as the working fluid.  When there is temperature difference in two air streams of each end of the heat pipes, hot air stream applied to one end of the heat pipe, heat boils the inside fluid causing it to change phase from liquid to gas.  This vaporization process absorbs large amounts of heat from hot the air stream. Vapor then travels to the other end of the heat pipe, where another air stream with the lower temperature causes the working fluid to condense and release the heat to the cold airflow.  Fluid return is normally accomplished by gravity. The constant circulation of evaporating and condensing of the working fluid is the principle of heat pipes heat transfer.

Heat pipes can transfer heat with minimal temperature difference between one end and the other.

Passive HPT heat pipes do not need a circulating pump to operate and have no operating cost except for a nominal increase in static pressure.  They have no moving parts to malfunction or to be maintained.

A traditional heat pipe is a hollow cylinder filled with a vaporizable liquid. 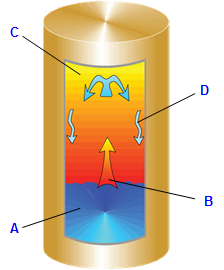 Air Conditioning in a Hot and Humid Climate 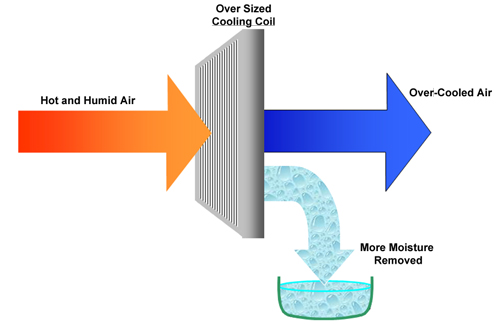 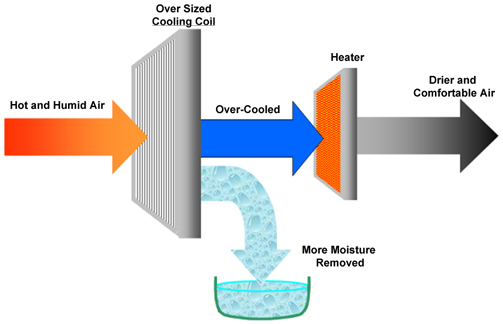 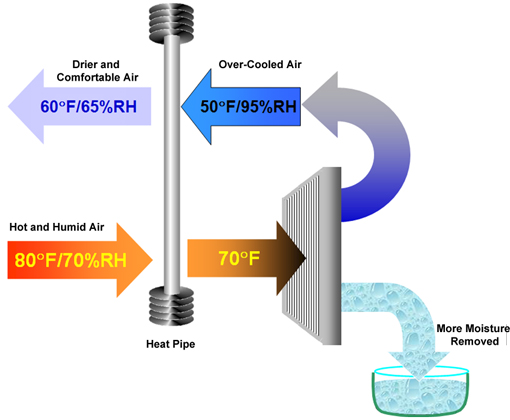 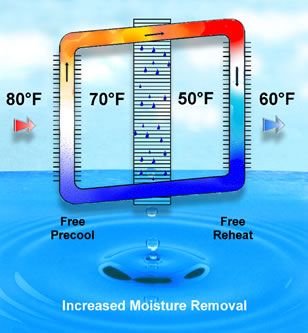 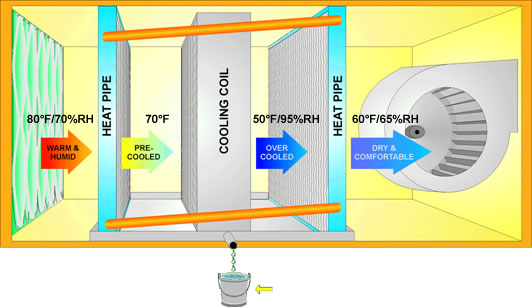