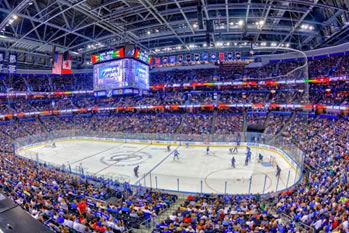 Before HPT’s engagement, the arena’s ice quality was ranked near the bottom among NHL arenas. This was largely due to the Tampa Bay area climate, where high humidity makes it difficult to create and maintain top-quality ice, which requires dry air. Before HPT arrived, the Amalie Arena was generating around 60% relative humidity (at 65°F) when the NHL recommended 40% relative humidity at 60°F, with a dew point of 36°F.

HPT’s DHP™s, which have no moving parts and require little maintenance, use the “phase change” of the working fluid in Amalie Arena’s HVAC system to precool outside air before it enters the cooling coil and reheat the air exiting the cooling coil using recovered heat. This reduces the load on the cooling coil, while lowering the dew point. HPT’s modeling shows that its DHP™s remove close to 350 total tons from the cooling load, and roughly four million Btus per hour of reheat, which is necessary to maintain comfortable conditions for over 20,000 fans. This will save the Amalie Arena an estimated $600,000 per year in energy costs.

“Not only did the heat pipe solution allow us to keep all construction inside the existing mechanical rooms and off the roof, greatly reducing first costs,” said Mike Tappouni, of Tappouni Mechanical Services, “but it allowed us to reduce overall energy consumption as well, despite the need for colder water from the chillers. In addition, the reduction in maintenance cannot be understated. It literally went from a maintenance nightmare to a dream.”